Bombs have been booming in the North for 5 years, and they’ve practically marked daily registers in the past few months. The victims, now in their uncountable, have seen death in the most-unannounced fashion, their famlies and *unlucky survivors have been made to live with the cadaveric ugliness of burying loved ones as mutilated ensembles. Just talk about getting ‘accustomed’ to the damage of unbridled bloodshed and the unease of unpredictable peril. How hard can that be!

Despite this sustained genocidal livelihood up North, I believe it is grossly unfair, that all we still have to offer to salvage our fellow countrymen in this region are a similitude of solutions, and a host of fingers pointing to what and what have sabotaged anti-insurgent efforts so far. It’s been more of talk, sympathies, empathies, DiaRizGods, hashtags, reassurances, stale state of emergencies, debates, and the likes, all of which have sadly ended up being mere; they’ve all amounted to excuses, and none of these excuses can further excuse the now inexcusable loss of human lives.

It is unfair that these killings have remained unchecked, so much that we no longer blush about them; so much that we’ve seemingly forgotten that it is wives losing husbands and vice versa, children getting orphaned, families getting wiped, lineages getting lost, and parents getting fruitless, per day!. We’ve forgotten the unbearable but avoidable pain laden within each blast. A bomb goes off, snatches human lives, and it trumps up as just another news item; very unfair. We have just forgotten. And, as separatist as the following sentence may sound, it is our sad truth. If these messed up mofos manage to lurk into the West, and one of their bombs barbacue a hundred Nigerians in the Redemption camp or some NASFAT gathering in Ibadan, suddenly, the news caption will change from the usual and carry more ante, suddenly, government will receive a jolt and politically tepid reaction will be replaced with pragmatically interventionist action.

Suddenly, that Nigerian factor, the one which seeks a virgin jolt before government gets proactive or actionable about a protracted ill, just sets in. A point where one would ask, why the less actionable means while the bombs were booming in the North? Why did we get used to it, that we had to need a jolt to push us to chase another course of action to fight Boko Haram to a halt? Why?

Haven’t these killings gone too far already, beyond too far really? 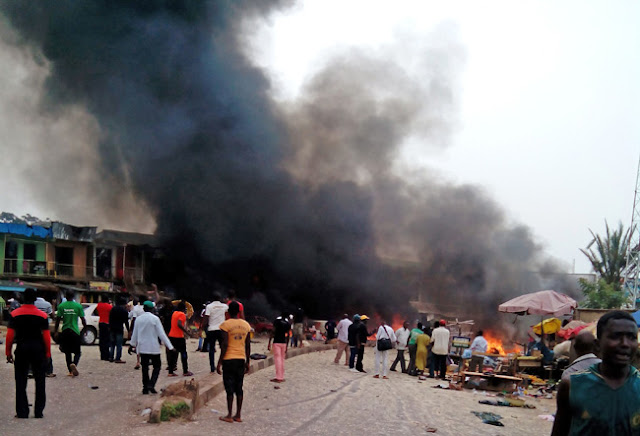 I will see myself wallowing in unpatriotic falsehood to excuse my country’s inability to conquer these terrorists by referencing the worldwide struggle with terrorism. It is a shame that a benign sect was allowed to grow this malignant right under the watch of Africa’s largest army in the first place; I believe redemption of pride should be a primal motivation factor now.

In these 5 years of combating Boko Haram, the Nigerian Armed forces, the nation’s first line of defense, has continuously cited sabotage and loose intelligence as the Achilles’ heel to their efforts. But does that mean it’s a dead end? Definitely not! Rather than getting used to the unfortunately continual civilian and military casualty, our armed forces and patriotic civilians alike, can use it as motivation to end this carnage once and for all. There must just be another course of action to defeat these terrorists. But we will get to know that only when we shake off this dour perception of just getting used to, or getting over, the next blast.

President Buhari has urged the new service chiefs to save the reputation of the army. This call must be taken more than clarion, as there’s no need for excuses anymore. They must literally admit the role of expedition and proactivity in clamping terrorist activities above the Niger.

Also, as hard and sacrificial as it is, the citizens’ effort to stop this terror cannot be overemphasised. The churches, mosques, individuals and civil society bodies have done their bits as touching alertness, security and provision of intelligence to complement government and military efforts; but, I think more needs to be done in the honour of patriotism and nationhood. A close example is the ongoing  deliberation about hijabs which should be a no-brainer if human lives actually matter. If predominantly Muslim neighbours, Niger and Chad, could’ve decided to temporarily shun islamic fundamentalism by banning the wearing of full-blown hijabs in public places all in a honest quest to overcome the whims of terror, I see no debate in entrenching such too in Nigeria.

Whatever needs to be done must just be done. Patroits can try to understand the attendant frustration with sabotage of true efforts, be it political or internal. But, this is where relentless dedication wins. Sabotage is conquerable, likewise is the challenge with intelligence gathering and superior combat techniques. The infamous “Nigerian factor” shouldn’t be the undoing of these almost hapless Nigerians domiciled in the North.

My Landlord here in the south-west is a Kano returnee, or better put, a Kano ‘Flee-ee’; he had spent 29 years as a Priest in the Anglican setup, until he had to flee from this Haram to existence, after witnessing a slay of his veteran colleagues. He doesn’t go through a conversation without regretfully reminiscing about the beauty, ease, affordability, the symbiotic coexistence and commerce-friendly characteristics that once donned life and living in the entire northern region. On behalf of these fellow countrymen, I make this renewed plea to salvage the North. The mere imagination of living with constant fear, palpable paranoia and the faintest expectation of safety, in itself is torment alone, talk less experiencing it forehand. I’m sure that asides the blasts, this experience itself is another cause of mortality via coronary/heart attacks.

The North must be saved, the raw beauty of this region must be salvaged from the ugly grasp of insurgence, not for anything else, but for the indigent and resident countrymen that love her.

If there’s no employmemt of expedition to redeem Northern Nigeria, if there are no truly concerted efforts to shun whatever talk there is and just get down to shutting down this deplorable war, then, nationhood has failed flawlessly.

It won’t be fair to see an entire region demised entirely.