Cristiano Ronaldo is super human, Zinedine Zidane is a true winner, and Real Madrid swat Juventus aside to become champions of Europe again, a record 12th time! The third in four years! Extraordinary!

Real Madrid have become the first team to win the Champions League two seasons in a row courtesy of a 4-1 defeat of Juventus in Cardiff this evening.

Cristiano Ronaldo played a huge part in his side’s win thanks to a brace which made him the first player to score in three Champions League finals, as well as taking his personal tally to 600 goals. 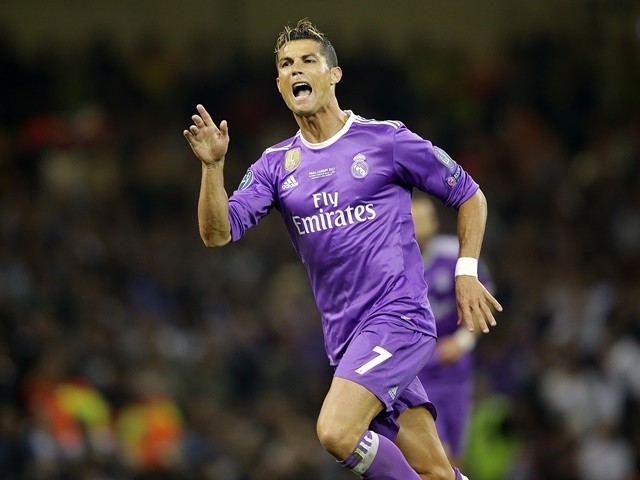 For Real, they have now won the competition three times in the last four seasons and have notched up a 12th victory in total in the Champions League and its predecessor the European Cup, while Juve have now lost five finals in a row.

Juve were quickest out of the starting blocks in an exciting opening period, with Gonzalo Higuain stinging Keylor Navas‘s palms with a long-range drive just five minutes in and Miralem Pjanic forcing an acrobatic save from the Costa Rican two minutes later.

However, Zinedine Zidane‘s charges went on to take the lead against the run of play after a slick counterattack which involved Karim Benzema and Ronaldo ended with Dani Carvajal‘s cutback being curled home by the Portugal international 20 minutes in.

Nonetheless, Real’s lead only lasted seven minutes as Juve drew level in exhilarating fashion, with Leonardo Bonucci‘s pass from defence helped on by both Alex Sandro and Higuain into the path of Mario Mandzukic. 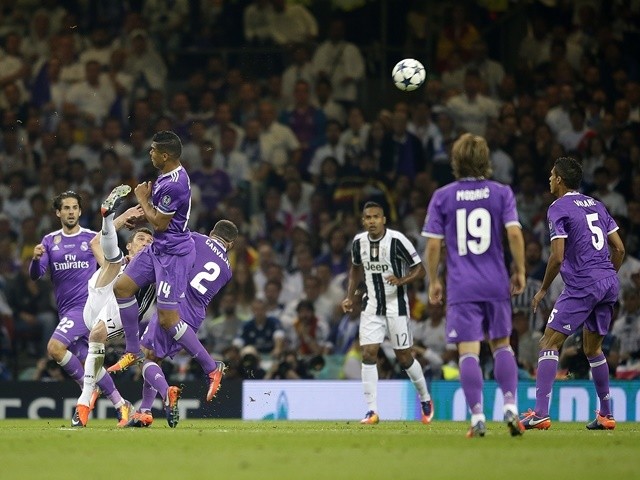 The Croatia international controlled the ball with his chest and, with his back to goal and several defenders crowding round him, curled a stunning overhead kick past the reach of Navas.

Ronaldo had a chance to hit back as he tried an audacious overhead kick which struck a Juve defender and later misjudged an attempted diving header from Isco‘s cross as an entertaining first half ended level.

Los Blancos made a faster start to the second half as Luka Modric tested Buffon with a left-footed strike from outside the box and went on to retake the lead on 61 minutes through an unlikely source.

Defensive midfielder Casemiro latched onto a loose ball following Toni Kroos‘s attempt and decided to have a shot from about 35 yards out, which ended up taking a heavy deflection from Sami Khedira and dipping past Buffon into the bottom-left of the Juve goal. 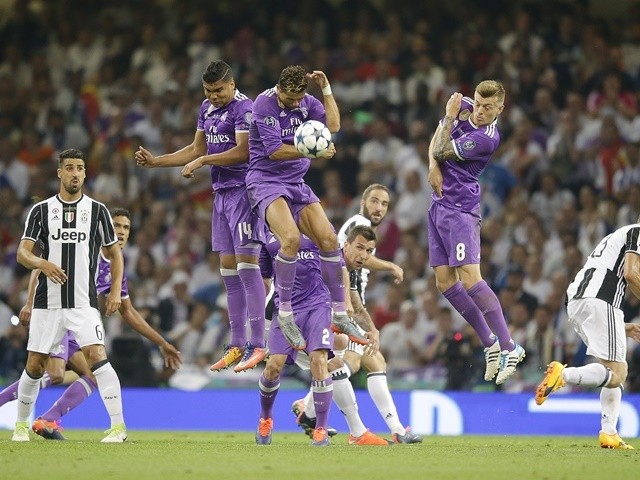 Juve failed to regroup following Real’s second goal and, just three minutes later, Ronaldo had struck again as he ghosted in past two defenders towards the near post to prod home Modric’s cross from the byline.

The shellshocked Bianconeri brought on Juan Cuadrado, Mario Lemina and Claudio Marchisio in a bid to add fresh legs and attacking impetus, while Welshman Gareth Bale came on to see the game out in his home city.

Juve’s frustration began showing as several players were booked for needless challenges and soon enough they were down to ten men after Cuadrado was shown a second yellow card after a controversial spat with Sergio Ramos, who appeared to make a meal of a light push from his opponent.

The Serie A champions’ slim hopes of getting back into the game were killed off for good when, on 90 minutes, substitute Marco Asensio slotted in left-footed from eight yards out after Marcelo cut the ball into his path from the left-hand byline.