This is Bravo stuff, we ain’t stopping. Oga Femi Adesina should not come and be famzing this one as another “Sai Baba” feat oh, else, I go vex…ehn ehn. This is dedication rewarded, passion refuelled, and all in all, inspiring.

So, Nigerian artist Otobong Nkanga, received the eighth Yanghyun Prize at the National Museum of Korea in Seoul on Thursday.

“I am happy to be here, honored and extremely overwhelmed to receive this prize. And I am very proud to represent my continent and my country Nigeria,” said Nkanga at the award ceremony. She added, “It’s an amazing thing to imagine that my work is recognized in Korea, on the other side in the Eastern part of the world.”

Nkanga, the first African-born artist to receive the prestigious art award, is expected to receive $86,300 in prize money and an opportunity to hold a solo exhibition at any chosen museum around the world.

According to the prize’s two judges — Chris Dercon, director of Tate Modern, and Adam Weinberg, director of the Whitney Museum of American Art — the artist has interpreted serious social issues such as inadequate distribution of resources and imbalances in the global economy through her unique lyrical perspective.

“Her work addresses the effect, movement, use and meaning of global resources and how they impact society,” said Weinberg, at the ceremony.

Nkanga, 42, born in Nigeria, lives and works in Antwerp, Belgium. She has held exhibitions at renowned art institutions, including Stedelijk museum in Amsterdam, Sharjah Biennial and Tate Modern.

Nkanga has been a prolific artist, creating more than 28 series of artwork from 2003 to the present. She has traversed different mediums from painting, photography, sculpture, installation to performance, drawing her inspiration from her personal memories, environment and postcolonial histories related to her home country.

Her “Filtered Memories” series (2009-2010), which consisted of drawings and paintings, reflected herself, based on selected memories of her childhood and teenage years in her home country. The series developed further to examine abstract concepts of labor, domesticity, home, belonging and possession and their effects on society in “Social Consequences I-II-III” (2009-2010).

“Otobong Nkanga is taking journey in cultural space of art, taking many disciplines from ecology, from science, from sociology, from politics and theater,” said Dercon. 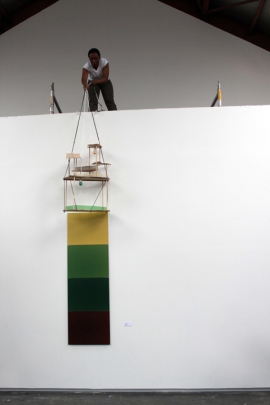 She also has symbolically dealt with environmental issues through installations and performances that use natural objects such as stones, leaves and tropical colors reminiscent of Africa. She presented a performance for her 2010 “Tropicology” series in which she held up banners in tropical colors that remind of her childhood memories and to explore architectural structures in tropical areas.

The prize, created in 2008, is given by the Yanghyun Foundation, which recognizes established artists with in diverse fields from art to film, regardless of nationality.

“This is a prize open to all international artists without any kind of prejudieces such as nationality, age, gender and ethnicity,” said Choi Eun-young, chief director of the Yanghyun Foundation, in her greetings at the ceremony.

“With the prize and support, we hope the recipient flourishes and achieves wider accomplishment in art,” Choi said.

Why Nigerians Should Take Advantage of FTX Crypto Exchange